A Virtual Tour of Joy Street

Joy Street has completely transformed from a nearly empty space 6 months ago, to a giant community workshop with 6 different craft areas and plenty of room to make cool stuff.

If you haven’t set foot inside recently, these photos will give you some idea of the state we’re in, with workbenches and equipment set up to accommodate classes and independent projects of all sorts. 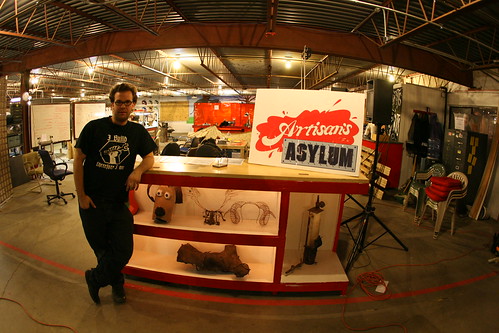 Gui and our glorious front desk, with lighted display shelves.

Our front desk was built by several of our members in the Building the Asylum class, and it’s not only a useful piece of administrative furniture, it’s a great place to show off smaller projects made by our members. In the distance, beyond the social area, you can see the glow of the our welding curtains. To the left, whiteboards mark the boundary with Robotics and Electronics, where many dark arts are practiced. We’ll visit there later. 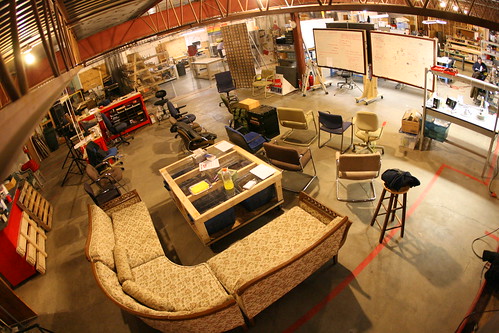 The social area, as viewed from the ceiling.

This is our social area! It can be re-arranged for group meetings, whiteboard brainstorming, presentations… or it can just be cleared out for shenanigans. The coffee table is not only a convenient place for snacks, it holds the Lost and Found bins, which become a source for random materials. Items get four weeks to be claimed by their owners, after which time other members may take them for creative purposes. Anything that remains unclaimed will eventually graduate to the defenestration bin. 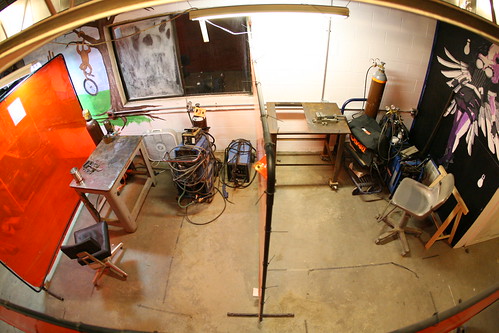 Behind the orange welding screens are two welding stations, each containing both a MIG and TIG welder. The murals on the wall were painted over the summer. Grinders and other tools used for preparing welding are nearby; this area holds down one end of our metalworking area. 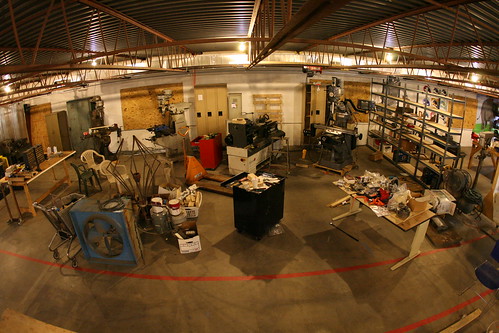 Our precision machining area, with multiple mills and a lathe.

Near the other end of the metalworking area we have our precision metal machining tools. We have three milling machines (one of which, the Sharp on the right, is computer-controlled) and one large lathe. Excuse the mess – we’re still getting all of the workbenches built for this area, and storing everything in it’s proper place. 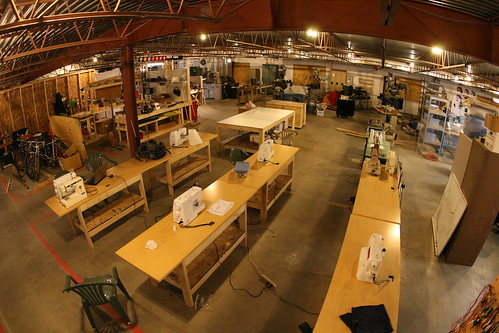 Opposite precision machining is the fiber arts area. We have several home sewing machines, an industrial sewing machine, and a serger or two.  The sewing tables were built by students and instructors in Building the Asylum. We also have a gigantic cutting table, and will soon bring in our four-color silkscreening equipment from Windsor Street. Off the right side of this photo lies Robotics/Electronics. 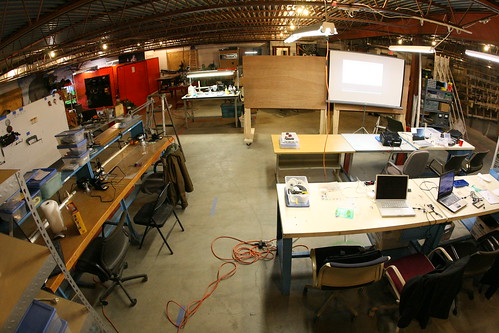 Turning from fiber arts, we can look into the electronics craft area. On the far side, (slightly to the left of middle) is the precision assembly area; it has a stereo microscope, a high-powered precision soldering station, a couple of fine tools and will soon have a hot-air rework station. The tables in the middle of the space are outfitted with standard soldering iron stations and components. There are also plenty 0f whiteboards to draw out your circuits! 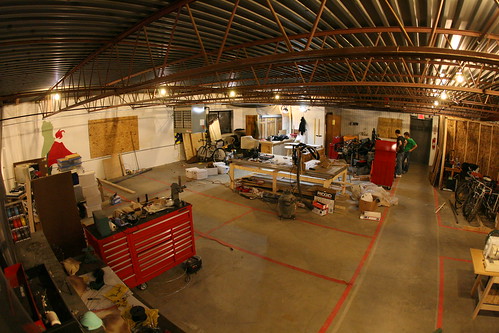 Some rental plots, with a CNC router in progress.

At the far end of the space are several areas rented out to individuals. A CNC router is being constructed in one, which will move into the woodshop when it is ready for use. We also have some renters working on restoring a Formula SAE car, others working on robot dinosaurs, and one starting up a contract manufacturing business, just to name a few! 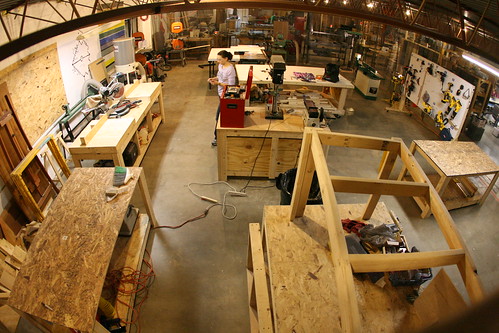 The woodshop, viewed from the workbench end.

The last craft area in the tour is the woodshop. The workbenches, tool board, and stock rack (not shown) were all constructed through our Building the Asylum class. We’ll have to rearrange a few things to bring the CNC router in, but things are looking good!

Covid-19 Continues to Impact Our Region

Due to the impacts of Covid-19 in the greater Boston region, we regret that Artisan’s remains closed to the general public. We continue to serve our members on a limited basis, and instruction is taking place online and on a one-on-one basis. We regret the inconvenience, and we look forward to welcome our Somerville, Cambridge, Boston and surrounding communities in the future. In the meantime please stay safe and keep healthy.